When I first heard we were PCSing to New Orleans, two words popped into my head: Mardi Gras. I think we’ve all seen the images of colorful floats and beads being tossed by costumed people, riding through the streets of the city. Because Mardi Gras happens in February or March each year, and we just PCSed this summer, we haven’t had the opportunity to experience it firsthand (yet!). But that didn’t stop us from getting a jumpstart on understanding the customs and traditions surrounding this event.

A few weeks ago, we headed to Kern Studio’s Mardi Gras World. It is only a 25 minute drive from NAS JRB Belle Chasse, and 15 minutes from Federal City. There is a huge lot for parking, which will run you $15. Mardi Gras World does offer a free shuttle from downtown, so check out their website for information on that service if you are visiting the city and staying at a hotel. Tickets are generally $22 for adults, but we bought ours on Groupon the day of for $11 each! It looks like Groupon regularly offers this special. 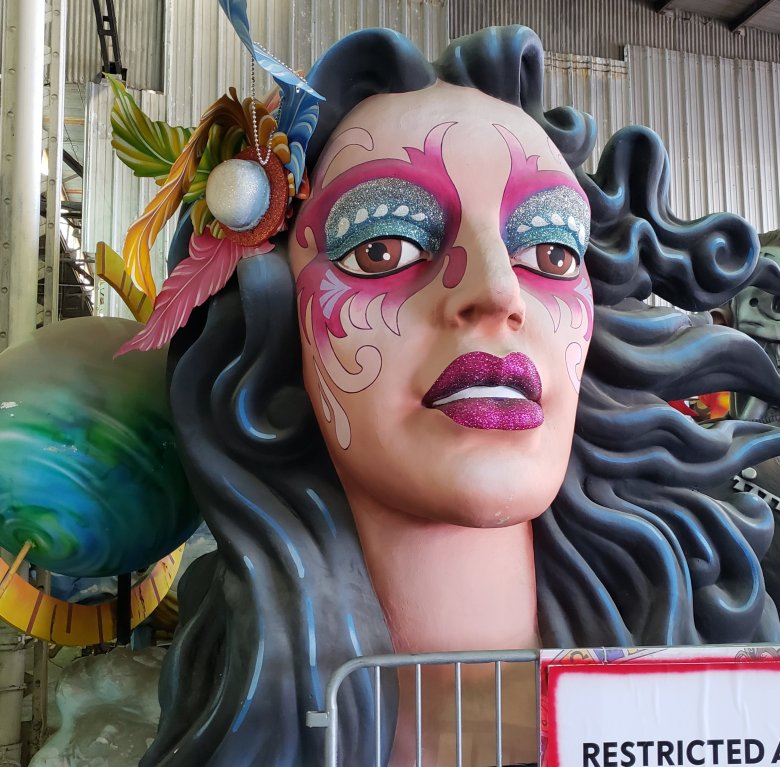 We toured Mardi Gras World without our kids (who are 3 and under). I felt that this tour would be best for kids ages 5 and up. There is a 15 minute video in the beginning, which did an incredible job of explaining the history of Mardi Gras parades in New Orleans, as well as the Kern family’s involvement in designing and building the colorful and creative floats. I believe kids ages 5 and up would have the attention span for the video (but you know your kids best!). 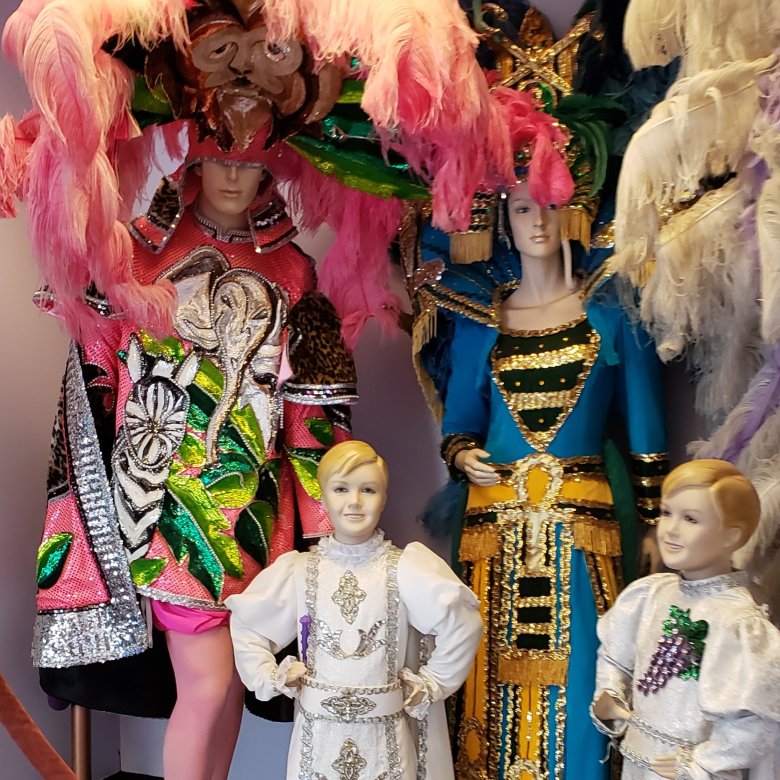 After the video, you’ll get to sample King Cake! This is a sort of mix between vanilla cake and cinnamon coffee cake, and it is a tradition to eat during Mardi Gras (this winter, you can plan on a post from us about all the best king cakes in the city!).

Following the video and cake is the actual tour. You get to walk through the artist workshops and see floats in various stages of completion.

One of the most fascinating things we learned on this tour was how the artists reuse pieces year after year, reinventing and imagining them to fit the new themes. Here is one example: this was a John Travolta head from a Grease-inspired float, that is now being changed into a Marvel villain for Mardi Gras 2019! Do you see it?? Check out the Grease sideburns that will be covered up, and the new mustache that is being formed! 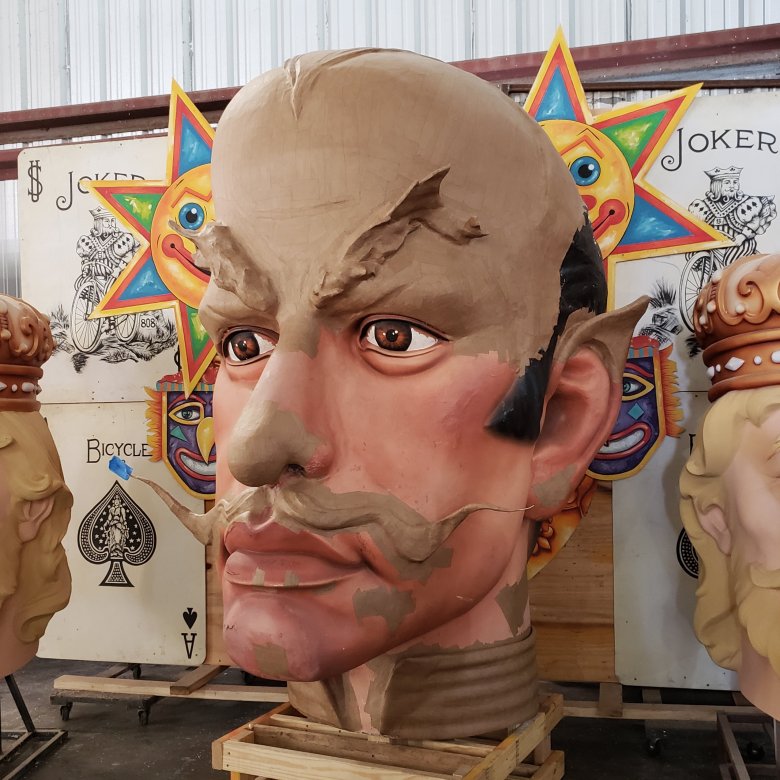 The brown spots are papier mache. Most of the pieces on the floats are now made of styrofoam, covered in papier mache and then sprayed with a covering and painted. There are many steps involved, and the artists are incredibly talented! Look at all the color on this one float: 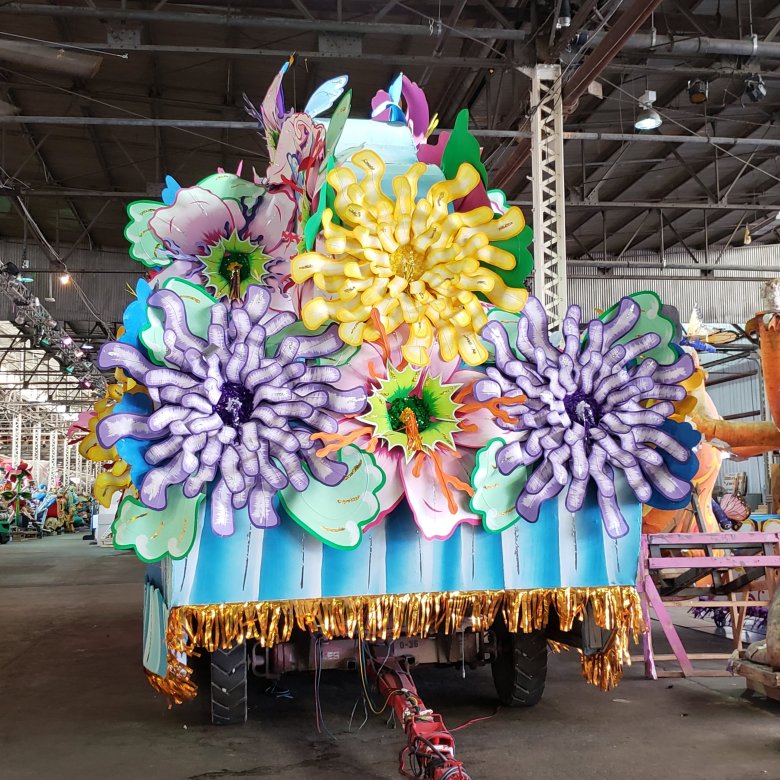 The warehouse where you take the tour is HUGE – we couldn’t easily capture the expanse in a few photos. You get to walk amongst hundreds of floats and the creations that will sit atop these floats. And the cool thing is they change every year, so you could take the tour each year and see completely different pieces.

On top of making many of the Mardi Gras floats, Kern Studios also makes pieces for amusement parks, as well as these famous cows you see on billboards and Chick Fil A restaurants all over the country:

The tour is approximately 1 hour long, and Mardi Gras World is open 7 days a week. Check out their webpage for more details. We highly recommend this tour as a way to begin your Mardi Gras knowledge and planning. This will be the number one tour we take all of our out of town visitors on, as well. We cannot wait to share more about this New Orleans tradition as we get closer to the actual day (Tuesday, March 5, 2019)!

This site uses Akismet to reduce spam. Learn how your comment data is processed.